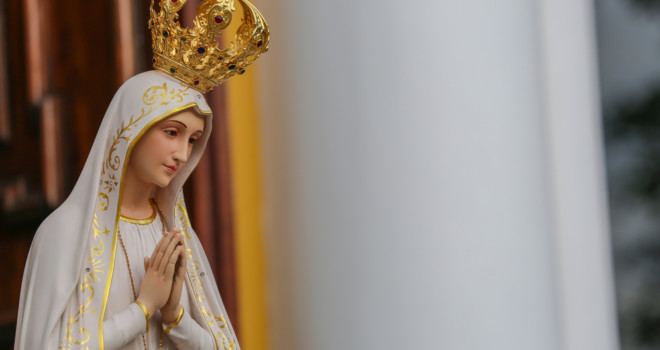 The following article was published on Catholic Exchange on Monday, May 13, 2019.  Thanks to CE for allowing me to write & share my devotion to Fatima!

Fatima, Portugal, is a rural agricultural village, even to this day.  It was definitely so in 1917, when three young shepherds were visited by the Blessed Mother.  During six monthly visits, Mary asked Lucia dos Santos and Francisco and Jacinta Marto to pray the Rosary daily and to offer sacrifices for the conversion of sinners; she taught them short, beautiful devotional prayers; and she granted them visions about what would happen in the world if this message of penance and conversion was not spread.

I was incredibly blessed to visit Fatima in 2011.  During preparations for that pilgrimage, I inherited a copy of My Pocket Rosary by Fr. J.M. Lelen, which is based on the Fatima apparitions and message.  That tiny little devotional book changed my prayer life: I drew closer to Jesus, I became increasingly devoted to Our Lady of Fatima, I fell more deeply in love with the Rosary, and I came to understand the central place that conversion occupies in the Christian life.

The booklet recommends a wonderful prayer before reciting the Rosary:

Queen of the Holy Rosary, you have deigned to come to Fatima to reveal to the three shepherd children the treasures of grace hidden in the Rosary.  Inspire in my heart a sincere love of this devotion, in order that by meditating on the mysteries of our redemption which are recalled in it, that I may be enriched with its fruits, obtain peace for the world, the conversion of sinners and of Russia, and the favors which I ask of you in this Rosary.

Certain phrases within that prayer stand out to me.  The most prominent phrases are “three shepherd children,” “treasures of grace,” “mysteries of our redemption,” “enriched with its fruits,” “peace for the world,” and “conversion of sinners.”  These tend to be the things my mind ponders while I recite the decades on almost a daily basis.

After that opening prayer, the booklet recommends asking for particular fruits while praying particular mysteries.  Such a practice has been common among Catholics for several generations while reciting the Rosary.  The requested fruits in this booklet match up with those from history, with a few slight variations.  I can say with certainty that this is where the deepest, richest development in my spiritual life has happened.

I have found the “treasures of grace hidden in the Rosary” by meditating on these fruits, in addition to meditating on Jesus’ objective work of salvation.  By pondering these fruits, I come to know how Jesus wants to transform and redeem me.  He wants to draw me away from pride, greed, and lust and move me toward humility, detachment, and chastity.  These transformations allow me to love others more fully, without caring so much about myself.  They allow me to become more zealous for God’s glory than for my own glory.  This is precisely the mystery of redemption that He has in store for me.

More recently, as I have been meditating, I have come to know that the message of Fatima and its fruits are embodied most fully in the three young visionaries to whom Mary appeared in 1917.  Lucia dos Santos and Francisco and Jacinta Marto exemplify the humility and detachment called for by Mary, since they were simple, poor shepherd children in rural Portugal.  More than that, they were open to the message that God was giving them through Our Lady; they were courageous in the face of terrible opposition; and they were willing to make heroic sacrifices to honor Mary’s requests.  After Francisco and Jacinta passed away (in 1919 and 1920, respectively), Lucia continued to spread the message of Fatima with great zeal throughout the remainder of the twentieth century.

The primary request that Our Lady made in the message of Fatima was prayer and penance for the conversion of sinners.  The children gave up lunches, and even drinking water, because they wanted souls to be able to enter heaven.  In August 1917, when they were arrested and imprisoned, they felt abandoned by their families, but they offered all that agony to Mary and Jesus for the conversion of sinners.  It is quite likely that the first sinners whose hearts were turned were the very criminals who occupied prison cells with the children.  These children showed them hope that they hadn’t known in quite some time.

When I meditate on the heroic virtue of these children, on the ways that they were obedient to direction given by God and by Mary, I realize that I am far from the holiness that God desires of me.  The conversion of sinners is primary in the message of Fatima, and I realize that I am at the front of that line.  So, I need to keep praying the Rosary, meditating on the fruits of conversion and redemption that are available in it, and asking for the intercession of the three holy visionaries.  Perhaps then I will come to know the peace that they knew on earth and that they now know in heaven.