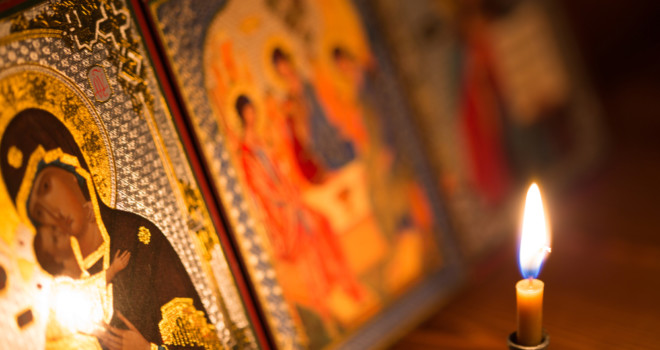 The following is an article that appeared on Catholic Exchange on Thursday, December 10, 2020. I am grateful to CE for publishing my work!

While I am not always able to do so (usually because of inner distractions, but also because of squirmy children), I do my very best to listen to every prayer that is said at Mass. I was blessed during this past weekend’s Mass to struggle and strain to hear the words of the Preface, which is said before the Sanctus and the Eucharistic Prayer.  The prescribed preface for the First Sunday of Advent is as follows:

For he assumed at his first coming the lowliness of human flesh,
and so fulfilled the design you formed long ago,
and opened for us the way to eternal salvation,
that, when he comes again in glory and majesty
and all is at last made manifest,
we who watch for that day may inherit the great promise
in which now we dare to hope.

That prayer reminded me why I so thoroughly enjoy the Advent season, and why I am so attracted to the virtue of hope.  The extraordinary seasonal joy that I experience, as well as the attraction to preparing now for what is to come, happens precisely because hope is essential to the nature of Advent.

The preface prayer above captures four tenets that are essential for hope, real Christian hope, to be truly present.  The first of those tenets (chronologically, though not first in the text of the prayer), is the context of the historical development of God’s plan.  The prophet Jeremiah remarks that God intends to fulfill His promise and bring His chosen people, Israel, back to the Promised Land after exile; and that the earlier covenants made with the nation will be renewed.  The climactic statement in Jeremiah’s prophesy states, “For I know the plans I have for you, says the Lord, plans for welfare and not for evil, to give you a future and a hope” (Jer. 29:10-11).  In this covenantal relationship, especially because of God’s incessant patience and mercy, Israel lives in hope because they know that God will restore and elevate their kingdom.  Of course, it is not until the advent of Christ that Israel can witness and begin to understand the fulfillment of “the design you [God] formed long ago.”

That leads directly to the second essential tenet of hope: the fact that Christ assumed “the lowliness of human flesh” in the Incarnation.  Without the reality that “the word became flesh and dwelt among us” (Jn. 1:14), the way to eternal salvation cannot be open to fallen human beings.  By assuming human nature alongside the Divine nature; by His hidden years in Nazareth and His public ministry; by His Passion, Death, Resurrection , and Ascension, Jesus Christ has made available the sanctifying grace that feeds and sustains us on the journey toward eternity.  The Israelites hoped that the earthly kingdom would be restored (see Acts 1:6), and that they would dwell in the land of Canaan forever, without interference from the enemy pagan nations around them.  Yet, because the Messiah redeemed humanity in a radically different and unexpected way, our hope is placed in something altogether different.  It is raised toward “heaven as the new Promised Land” (CCC 1819).

The expectation of Christ’s return, and the establishment of the Kingdom of God, is the third essential tenet of Christian hope.  The very essence of hope is that it looks forward to something.  That “something” is nothing less than the return of Christ in glory to establish His eternal reign, along with the bodily resurrection of all humanity, when “all is made manifest.”  Indeed, the Holy Catholic Church recognizes this Day of Judgment as the end on which our sights are set when she prays during the Embolism prayer at Mass, “as we await the blessed hope and the coming of our Savior, Jesus Christ” (quoting Titus 2:13).  These two things, hope and the second coming of Christ, are integrally bound together and cannot be separated.  Christians hope for nothing other than to be counted among those who “will be called holy” and “recorded for life,” eternal life, that is (Is. 4:3).

Thus, the fourth essential tenet of authentic Christian hope is identified.  Recognizing that Christ will return and judge each individual’s holiness causes a person to undertake daily vigilance, work, and transformation.  St. Paul captures this idea perfectly when he writes to the church at Thessalonica:

“For you are all sons of light and sons of the day; we are not of the night or of darkness.  So then let us not sleep, as others do, but let us keep awake and be sober. … But, since we belong to the day, let us be sober, and put on the breastplate of faith and love, and for a helmet the hope of salvation” (1 Thess. 5:5-6, 8).

The light of Christ, which has been placed into each Christian at Baptism, provides the grace for that person to be sober and vigilant against his “adversary the devil [who] prowls around like a roaring lion, seeking some one to devour” (1 Pt. 5:8).  After a lifetime of watchfulness, avoiding sin and cutting out sin from our lives, we will win the reward of appearing with Christ in glory when He appears (cf. Col. 3:4).

Each of these four essential tenets comes into clear focus during the season of Advent.  During the first two weeks of the season, we hear lectionary readings that point us toward the Parousia of Christ, and those readings exhort us to repent and be prepared for that event.  We hear the words of John the Baptist, the final prophet before the Messiah, calling God’s chosen people back into relationship with the Almighty.  During these weeks we are also made aware of myriad opportunities to eschew the offerings of the Enemy via the culture around us; and we are presented with other opportunities to bring Christ’s presence to others through acts of service and charity.

Finally, the season culminates on Christmas Eve, when the whole world seems to be watching and waiting for the Messiah, who allows Himself to become a humble, vulnerable baby in a feeding trough.  These mysterious and unexpected details, however, reveal that the way to eternal joy and salvation, to the greatest inheritance possible, has been thrown wide open in humility.  That is the reason that Christians live in hope during this blessed season.